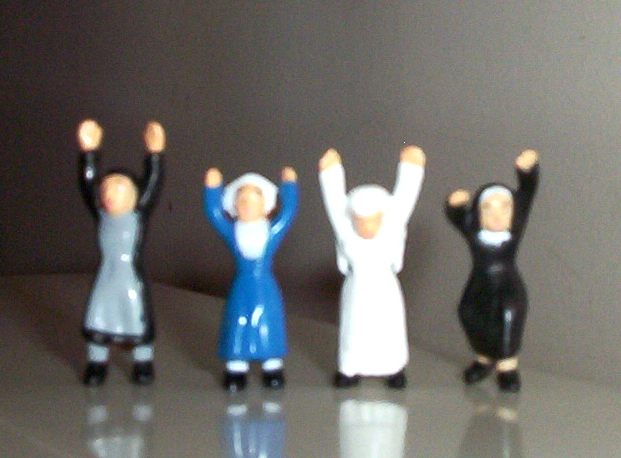 In Why On Earth Are So Many Millennials Becoming Nuns?, Eve Fairbanks examines why millennial women are flocking to religious orders in record numbers. The piece is a fascinating look at how ancient Catholic institutions are faring in contemporary times.

Several women are profiled in the article. One, named Rachael, in part seems to be reacting against the ambiguity of moral relativism.

It was partly a bitter joke, but partly a sincere thought. “There is nothing consistent in the secular world,” Rachael reflected. Catholicism, by contrast, taught that “truth is a fact.” Your obligations to other people and God couldn’t be trumped by your “personal truth.”

A portion of the piece focuses on the rising challenge of a more orthodox faith in the face of some failing ideas that were supposed to bring about ​a perfect society. The ways modern, secular life has let us down, from materialism to the existential ache that comes from a lack of meaning, are examined through the lenses of these young women pursuing the cloistered life.

We are a thing that is wounded, American society. People raised for the new millennium were to be a kind of final proof that democracy and American society was, indeed, the greatest that ever could be made, now that primitive superstitions had been cleared, tech and science and finance reigned, major political threats had fallen and our hegemony seemed complete. We were, and shakily remain, utopian in ways I would laugh at if I hadn’t bought into them, too. More than half of millennials still tell pollsters they believe they’re going to be millionaires. Most of us expected to achieve idyllic marriages, even though so many of our parents had divorced. We were taught that anything you hoped for could be achieved with the right planning, that life is a series of hacks: fabulous tricks, but ones that have a reliable code for how to repeat them.

These life hacks have become a sort of pseudo-religious phenomenon, with the appropriate amount of focus and attention given to them. The similarities are not hard to spot once you really look.

Things like Goop and the gluten-free movement are basically straight-up religions, promising spiritual renewal and healing from all sickness, only with a jade yoni egg as the Eucharist. We’re fixated on minimalism and self-purification, be it by the methods of Marie Kondo or “inbox zero” or Jordan Peterson, whose popularity rests less on his insights about Carl Jung or lobster biology than on his idea that life can be boiled down to 12 rules—commandments.

Though much of our culture seems to serve as an incubator for the construction of these neo-pagan paradigms, their escapes by way of the road to religious orders were not without bumps for the subjects of the story. No spoilers here, but being a nun is not an easy thing. As is noted in the article, it’s not the frequently thought of chastity that is difficult so much as it is the obedience. A lot of autonomy is lost. Aspects of one’s personal identity become subsumed by the group. Of course, those difficulties make the rising numbers of women trying to become nuns seem all the more reactionary and radical.

Robert Rackley @frostedechoes
Made with in North Carolina.
© 2017 Frosted Echoes